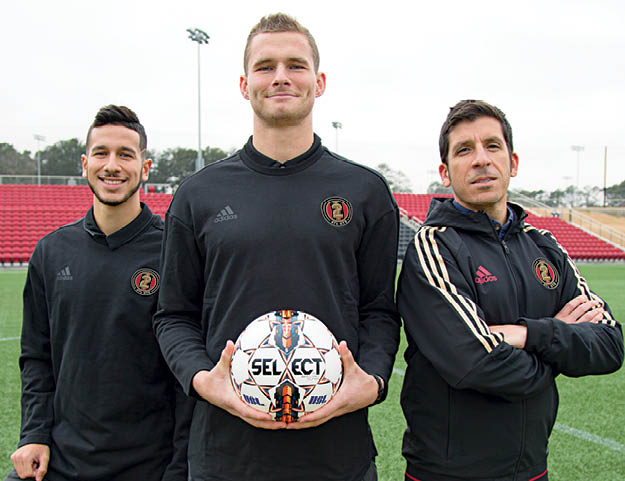 The success and fan base Major League Soccer team, Atlanta United, experienced during their first season was unparalleled. The team, who now calls Mercedes-Benz Stadium home, had a staggering 35,000-plus season ticket holders, the largest number in the league. In November of 2017, the club announced the addition of a United Soccer League team, Atlanta United 2 (ATL UTD 2), who will call Gwinnett County’s Coolray Field home. The team is currently training at the Children’s Healthcare of Atlanta Training Ground in Marietta along with the First Team.

Donnelly brings more than 15 years of coaching experience to the team, including working for the United States Soccer Federation and at the collegiate level for over 10 years. He has a strong track record for helping develop young players, is proficient in both English and Spanish and holds a U.S. Soccer class “A” coaching license along with the Academy Director License.

Q: What are you most excited about this season?
A: It’s our inaugural season; we have the chance to put a team of very good players on the field; many of them young players, but put a team on the field that is an image of the club, an image of the First Team. It is a really exciting challenge as a coach and for the players to have the First Team standard to live up to and look forward to. I think it’s going to be a really good thing for the fan base as well. It is forward thinking, aggressive soccer that is fun to watch and will hopefully help us get results and some wins.

Q: What are your goals for this year as a new team?
A: Our goals are first and foremost to improve all the players and give them a platform to perform, to prove themselves; to have a really positive trajectory over the course of the year. We see this team as a bridge that completes the pyramid in a sense, between the First Team, the Academy, and now we have the USL team. It’s kind of a proving ground for some of the younger players and for some of the more veteran guys who have the experience; it is a great opportunity for them to show what they can do as well. In addition to that, we plan to be very competitive and put a team on the field that the fans can be proud of and to get positive results.

Q: Is there anything you’d like to see from the community in terms of support for the team?
A: We’re really hopeful we will get really good fan support at Coolray Field. I think it’s going to be huge for these players and the club, to get people out. Then it’s our job to put a good product on the field so that they want to come back. The fan culture around this club is so strong, we all hope and expect that that extends to Gwinnett County.

Q: What should fans expect this season?
A: Fans that know the club well should expect another positive representation of how we play; bringing a similar level of excitement to the field. It’s one club; the goal is that all of the things they love about the First Team are extended to ATL 2. It is the same playing culture, the same core values, the same organizational beliefs. I think the expectation is a slightly different version of the First Team in terms of what they see on the field. New fans should expect a great experience at Coolray Field – we have some local players, some players that are a little younger than some of the First Team guys, hopefully some that they can really identify with in their backyard.

Q: What are you looking forward to about living in the Atlanta area?
A: The weather, coming to work at this facility every day. People are friendly, open, warm, they want to help.

Q: How do you feel about playing at Coolray Field?
A: We are excited with this new team to bring another part of the Atlanta United club to the fans in another part of the city. There are new players to know and love… we really hope we have the same type of support with the new team. We will do our part to put a good product out there, we want fans coming back for more.

An Atlanta native, Kevin Barajas grew up playing soccer from a young age. In high school, Barajas played for Atlanta United’s club team under Tony Annan, now Academy Director. He went on to play at University of Kentucky and took his last semester of school off to pursue his dream of playing professional soccer. He saw the announcement about the new team ATL UTD 2 on Twitter and decided to try out during their Dream tryouts in December. He was called back in January and found out he made the team.

Q: Did you always know you wanted to play professionally?
A:Yes, as long as I can remember. I used to watch {professional soccer} on TV with my dad and I would think, that’s what I wanna do. Ever since I was a little kid that’s what I’ve been working towards. My dad used to play soccer as well and my brother played too. As a little brother you want to do what your big brother does.

Q: How did you feel about Atlanta United (the First Team) coming to Atlanta last year?
A: I was really excited. I thought it was an awesome opportunity for the city and of course for soccer itself to grow. It was definitely time for Atlanta to get a team. As a soccer player you kind of get an idea, you’re like, well a lot of people like soccer here. It’s such a big city, so many people. You can just tell how people craved soccer here.

Q: How are you feeling about this upcoming season?
A: Really excited. From seeing the players that we have, the coaching staff and overall support of the organization, I think we will be really successful. It’s always a cool thing – coming to a new team, meeting new people, building new relationships.

Q: Who has been the most influential in your soccer career?
A: Coaching wise, definitely Tony Annan, my coach at the Club level. He believed in me when I didn’t even see what I could do. I started playing for him when I was 16 years old. I played for him for two years and I was the captain for his team both years. Also my family in general, my parents and my brother have always pushed me to follow my dreams and what I want in life. They have always encouraged me to be the best, and have been there to help me and support me.

Q: Were your parents excited when they found out you made the team?
A: They both cried when I told them. They sacrificed a lot, coming here from Mexico. They’ve worked really hard. They have definitely had their fair share of struggles, so being able to tell them my dream of playing pro soccer, I achieved that part, that first step, it definitely meant a lot to them.

Originally from St. Louis, Cochran played at the University of Wisconsin for three years before signing a Generation Adidas deal with MLS and playing for the Houston Dynamos as a first round draft pick. He played for St. Louis FC before signing a deal with ATL UTD 2 in January.

Q: What are your goals for the season?
A: Just to be successful. The first goal is to make the playoffs and then once we make the playoffs, our goal will be to make a run at the championship. Like our coaching staff said today, our goal is to win games, to play the right way, to get the team to develop. We are here to win.

Q: What are you looking forward to this season?
A: Just getting to know my teammates and honestly playing with a new group of guys. Getting to use this training facility and being around the atmosphere of the best club in the MLS is what I’m most excited about.

Q: You’ve been here two days. What do you think so far?
A: So far so good, the city is really nice. This is my first time being here, I’m super excited to explore.

Q: Did you play other sports when you were a kid?
A: Yes, I swam, played basketball, football and baseball. Going into high school I realized I needed to pick one. I had a conversation with my dad, we thought my best future would be in soccer and I really liked it

Q: Do you have any advice to young athletes who think they may want to play professionally one day?
A: Just to have fun and stick to their dreams. If they want to be a professional soccer player, the most important thing is going out there every day and continuing to learn and listening to their coaches. But you aren’t going to get better and enjoy the game if you aren’t having fun. If you aren’t having fun, you’re not going to be passionate about that sport. I would just say do what you love and enjoy. Anything is possible. If you believe you want to be a professional athlete, dreams come true, so just work hard and believe in yourself.

According to Atlanta United Vice President, Business Operations, Catie Griggs, the team plans to use the more intimate environment at Coolray Field for more player and fan interaction such as autograph signing and meet & greets. They want to make sure their fans get to be close to the team and get to know the players. The club takes fan feedback very seriously and wants to make sure the fans have an incredible experience. The first ATL UTD 2 game will be held at Coolray Field on March 24th at 7 p.m. against New York Red Bulls II. They are hoping to garner a large following in Gwinnett.