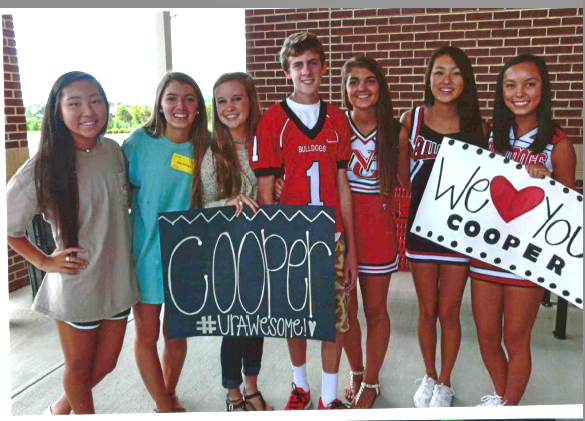 You may remember the story about Cooper O’Brien from our 2014 January/February issue. Cooper was fighting for his life against a rare form of cancer called Clear Cell Sarcoma, which he was diagnosed with in May of 2013. He lost that battle, at age 14, on July 6th 2014, yet his memory and spirit will always remain in the community of Suwanee. Cooper was full of life, hope and was an inspiration to everyone who met him. We had the opportunity to get to know him, his younger brother, Parker and loving parents, Kevin and Donna O’Brien who made the final year of his life the most fun and memorable year that any 8th grade boy could hope for. Cooper had been named Honorary Captain of the North Gwinnett High School football team during the Corky Kell Classic and State Championships; as well as Assistant Manager of the 8th grade boys basketball team. He had the opportunity to go on a Make-a-Wish Foundation trip to Hawaii with his family, fly a stunt plane, tour the Falcons stadium, eat breakfast with the Atlanta Hawks, throw the starting pitch at a Gwinnett Braves Game, and so much more. It was amazing to see how this young man truly touched the hearts of our community and how greatly he will be missed. Our lives have all been changed for the better from knowing this amazing young man.