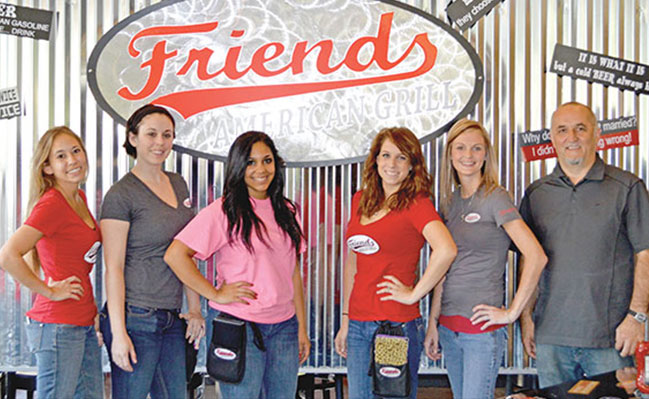 Friends American Grill serves up food and fun in the neighborhood BY: Tana Christian Suggs

As the old song says…“you gotta have friends,” and I’m not talking about the mega-hit television show featuring the cast of six twenty-somethings who were always there for each other. I’m talking about the local, fun-filled, neighborhood grill and bar of the same name – Friends.  Friends Suwanee Grill located at 3890 Lawrenceville- Suwanee Road opened in April by restaurant owners and Suwanee residents, Ray Stanjevich and Suzanne Cartwright. The owners aren’t new to the restaurant business. In fact, the Suwanee location is their third Friends location, with the others in Dacula and Dawsonville. Stanjevich said they had been eyeing Suwanee for a restaurant location for about three years. The owners said they know the Suwanee area very well, and even though they realized the location hadn’t been that successful for other restaurateurs, they were certain it was a good location for Friends.

“The city of Suwanee is obviously a great place to live and we wanted our restaurant to be a part of Suwanee,” Stanjevich said. “A lot of Suwanee residents understand the value of supporting local and independent restaurants.”

He also said that the city staff and officials have been very welcoming, supportive and eager to help the restaurant become successful. Stanjevich described the atmosphere of the restaurant as fun. With 22 large, flat-screen televisions, Friends is, perhaps, one of the best places for watching most sporting events. They also hold special events such as Team Trivia and live music featuring regional artists, on a weekly basis.

“What makes us unique is that we are a neighborhood grill where people can see and meet their neighbors and friends,” he said. “We are kind of like Cheers – where everybody knows your name.”

Friends has an extensive menu that includes items such as hand-cut steaks, pasta, burgers, sandwiches, and fresh wings. Stanjevich said that after working for a restaurant chain that rarely changed their menu, he learned that variety is the spice of life. So they change the menu every three to four months.

“Customers, especially regular customers, enjoy trying new items,” he said. “And we like to keep things interesting for them.”

Stanjevich said a popular menu item is the Loaded French Dip, made with a USDA Choice Top Round covered with their own dry rub recipe and slowly braised in the oven until all the juices are seared in, then sliced thin and topped with sautéed mushrooms, onions and melted Provolone cheese served on a hoagie roll. Other menu favorites include fish tacos with fried tilapia, special zesty sauce, cheddar cheese, red cabbage slaw and limes; and chicken wings using only fresh chicken seasoned with a variety of sauces including a couple of favorites: the House Sauce made with a blend of medium Buffalo Sauce and homemade Cajun Seasonings, and the Sriracha sauce – a hot Thai sauce sweetened just a bit so there’s a balance of hot and spicy. All of their sauces and dressings are homemade.

Friends offers a full bar with 20 draft beers, 35 bottled beers, 20 choices of wine, and 212 types of liquor. And now that the city recently allowed restaurants to offer Happy Hour prices, Friends holds Happy Hour every day from 4 p.m. to 6p.m. and from 9 p.m. to close.

As residents, Cartwright and Stanjevich offer support to the Suwanee Community by sponsoring numerous school athletic teams and help with various fundraisers to aid those in need. Each year at the restaurant they hold Ansley’s Easter in memory of Ansley Arnette, a young girl who passed away from a rare form of brain cancer. During the event there are live and silent auctions, live music and special events for children, including an Easter egg hunt.

All sales on Easter Sunday are donated to a family caring for a sick child. Stanjevich said so far they have been able to raise more than $20,000 each year to help families in need. In addition, Stanjevich said this year Friends is committed to give away eight $500 scholarships to college bound varsity football players from several of the local high schools to encourage the students to further their education. And during the holidays, Friends holds a fundraiser party for Toys for Tots.

Many readers may already recognize the owner’s names, as they purchased a piece of the Berlin Wall at auction in May that has been on display in front of Suwanee City Hall. Stanjevich said they just made arrangements with Gwinnett County to have the piece displayed in front of the Gwinnett Justice and Administration Center for the next six months.

“Our goal is to have as many local residents see this piece of history, and to eventually give it a permanent home in Suwanee,” Stanjevich said. “Suzanne is a first generation American and I am an immigrant from Montenegro. It meant a lot to the both of us to be able to buy a piece of history and share it with others.”

For more information about Friends Sports Grill, visit the website at www.friendssportsgrill.com.