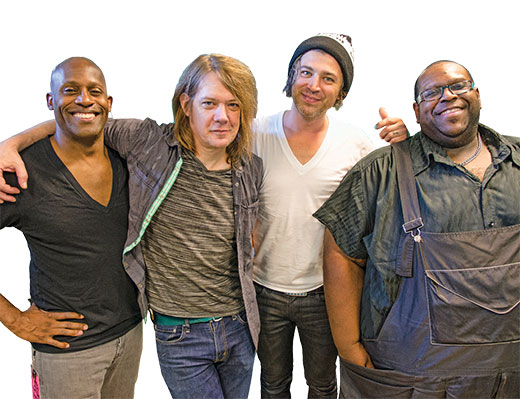 Alternative rock band, Soul Asylum formed in 1981 in Minneapolis and does not seem to be slowing down anytime soon. Lead singer Dave Pirner, age 51, is the only original member in the band today and led the group on a US tour – with a stop in Suwanee to rock the Town Center Park stage as headliners for the City’s annual August concert. The platinum selling band, most known for their emotional power ballads in the 90’s had hit singles with “Runaway Train,” “Black Gold” and “Misery.” The band looks forward to wrapping up an album that Pirner describes as, “an exciting record…without ballads and all that meandering kind of stuff.”

Had you heard of Suwanee before booking the show here?

No, but it’s beautiful here. Seems like a good place for a squirt gun fight! (a reference to the July-August cover of the magazine)
It’s definitely hot enough! So, where are you guys headed next?
We’re headed to Dallas tomorrow…I think…somewhere in Texas!
Is it hard to be on the road so often that you don’t even really know where you’re headed next?
Yeah, well, the cliché is true. When you’re on the road you wanna be home and when you’re home you wanna be back on the road. This was a three-week tour, which is just long enough to be away from your loved ones. I’m used to it now though. It kind of becomes more fun, because the band starts to get in a routine of playing every night and we get really good and start to gel with each other as the tour goes on.
Any memorable performances during this tour? Granted, after tonight, Suwanee will probably be your favorite!
We had a good gig in LA and a good gig in Chicago. That always feels good to get a good turnout in the big cities…in the “groover towns.”
Tell us about your new album coming out.
We have a new record in the can, as they say, and it’s finished. We just picked out the typeset for the album cover 2 days ago and it’s going to be called “Change of Fortune” and it is spectacular! Everything on the menu is excellent. It’s a pretty exciting record – not a lot of ballads and meandering kind of stuff. We can’t seem to nail down a release date, but we’re saying before the end of 2015!

You’ve been in the industry for quite awhile – how is it different today than when you first started out?
I think it’s a little more special now, in a weird way. I was actually thinking about this last night….we have become more of an internet-kind of community where people maybe do a lot of stuff without leaving their house. It takes a little extra effort to get them out here, so we do feel like the people at our shows really wanna be here. And then it becomes a bonding experience among human beings.
Speaking of the “internet community” – how do you feel about so much free access to music and sites like Spotify?
You know, I don’t think you’ll find many people my age with much of an appreciation for not being able to sell records anymore! I mean that part of it has really flipped the industry on its head…there have been a lot of casualties in the industry because of that.
True. It doesn’t quite seem fair, does it?
I’ve been trying to explain to people what’s happening to the music industry for a long time. A new model has not revealed itself for quite some time now…so I don’t know. But, maybe it will change with Taylor Swift putting her foot down and saying, ‘No more taking my music for free,’ and then everyone else will have to follow suit. I mean, it’s great, she’s standing up for all of us (artists) and she’s probably the only person right now that anyone will listen to.
She certainly has a lot of influence, but you have the years of experience and a network of support behind you. So, where do you want to drive people to listen to your music?
We partnered with the website “Pledge Music” to get Soul Asylum up to speed with our internet-savvy audience. They seem like a bunch of bright kids and we’re doing a lot with “Pledge” to raise awareness about the band…and to pay our producers.
We hope that there is a shift in the industry so that talented musicians such as Pirner can continue to make a living by doing what they are great at and what they are passionate about. Pledge Music is a social platform designed to directly connect consumers to the artists themselves. To learn more and get insider-access to Soul Asylum’s not-yet-released album, check out pledgemusic.com.