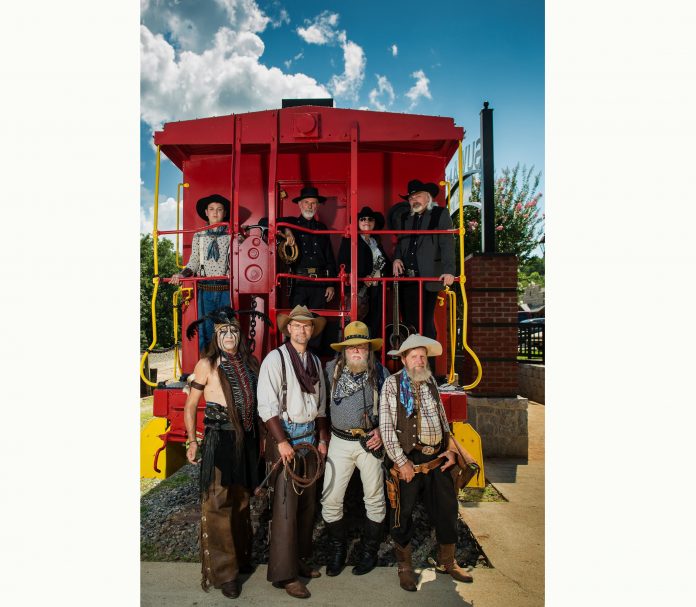 Area residents attending this year’s Suwanee Day celebration can expect several treats! But don’t be surprised if you see the likes of Annie Oakley, Hopalong Cassidy, Pot Shot Parker and others. And I don’t mean on the big screen!  New this year will be the Western Trails Cowboy Gathering entertaining festival-goers with an old-fashion cowboy show reminiscent of an earlier time when the good guys wore white hats and bad guys wore black! The group will have a chuck wagon on hand to explain how cowboys cooked and ate while on the trail and a prison wagon for those that want to get a feel for what it’s really like behind the black iron bars. Their performances will also include cowboy music, comedy skits, cowboy story-telling, rope tricks, bull whip demonstrations and more.

Robert Brooks, also known as “Fuzzy” is the organizer of the group comprised of folks from Georgia with a few from nearby states of North Carolina and South Carolina that strive to keep the television westerns and B-Western movies alive. Members of the group travel across the country to western festivals such as the Roy Rogers Festival and the Hopalong Cassidy Festival, just to name a couple, where they perform and sell merchandise. Suwanee Day will be their second Western Trails Cowboy Gathering.

And when you see one of these cowboys or cowgirls, don’t be shy… just give them a Yee haw,y’all!