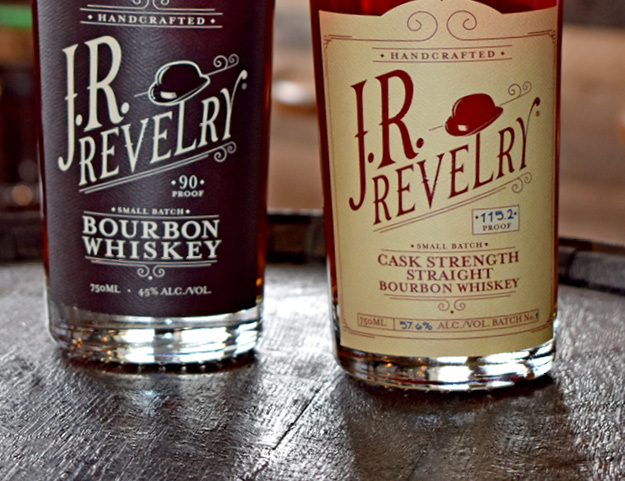 J.R. Revelry is an all American-made product- starting with the bottle and the label, and ending at the bourbon itself. That was the dream for owner Jesus Ricardo Tapia, or “Rick” to his friends, as he set out to make an affordable craft bourbon that everyone could enjoy.

The history of bourbon plays a large role in how Rick fell into the industry and ultimately decided to start his own company. Prohibition completely eradicated the industry within the states and, because of some tough laws that have only just recently been re-evaluated, it took a long time to begin building it back up again. We met with Rick to talk more about the craft-beverage industry and the future of J.R. Revelry in Georgia…

“My goal was to craft a traditional style of bourbon that was smooth and approachable. I wanted to help recruit both female and male consumers into the category and introduce them to America’s native spirit.”

Where did your passion for bourbon stem from?

I was introduced to and started drinking bourbon when I moved to Georgia in 2006 and worked in the Jim Beam offices. The super-premium small batch bourbon category was small back then and did not include all the brands we now see on the store shelf. I had worked in and enjoyed Scotch whiskey for many years. Bourbon was great because it was more approachable, with a sweeter taste profile, and versatile in cocktails. It was a type of whiskey you could enjoy throughout the year, both day and night.

My goal was to craft a traditional style of bourbon that was smooth and approachable. I wanted to help recruit both female and male consumers into the category and introduce them to America’s native spirit. Originally I launched a 90 proof bourbon which is common for the super-premium side of the category. I am now launching a cask strength bourbon (115.2 proof) in order to give consumers a product that they can tailor to their taste preference. In order to bottle at 90 proof we have to add water, and by bottling at cask strength we let the consumer decide how much water if any, they want to add to their bourbon.

What is it like living and running your business in Atlanta?

The craft distilling industry is still very young and small in Georgia. We are rebuilding something that was wiped out during prohibition and has taken us this long to re-embrace and rebuild. This is very exciting but also very challenging. Fortunately, Georgia has a great consumer base (the 11th largest liquor market in the U.S.), but we have a lot of educating to do in order to get people to visit and support craft-distilleries. My family and I have enjoyed being in Georgia and decided this was the place to plant more permanent roots by opening a business.

Is there anything you can share about the future of J.R. Revelry?

I am currently working on trying to open a distillery in downtown Roswell. We still have challenges to overcome but the city has been a great partner. We look forward to being part of a growing community and bringing craft-distilling to the area.

What are some of the best ways to serve J.R. Revelry?

I always ask people to taste J.R. Revelry neat first and then decide how much ice or mixer they may want. You should start with three small sips: the first will be a palate cleanser, the second will begin introducing the flavors, and the third will build upon the flavors. I always find that people who would have immediately added ice either pass on the ice or reduce the amount of ice.

SO WHAT MAKES BOURBON BOURBON?

Bourbon, by law, can only be made in the United States. It is an American Whiskey but is a very narrow, specific category of whiskey that must follow a tight set of guidelines. For example, the barrel must never be re-used and the bourbon must be made of at least 51% corn, the main grain of any official bourbon. It is also considered a sweeter whiskey because of the prominence of the corn.

J.R. Revelry Bourbon Whiskey is bottled at 90 proof and retails for about $29.99. The company is launching a new bourbon, with a higher proof of 115 that retails at about $49.99. The new J.R. Revelry Cask Strength Straight Bourbon Whiskey is the same grain mix as original J.R. but is aged and bottled with the same alcohol content that it has coming out of the barrel.

J.R. Revelry is available in liquor stores all around Georgia, so be sure to pick up a bottle and try it out for yourself! In addition, you can catch Rick pouring up his amazing bourbon at Suwanee Wine Fest this November!